Twilight Zone is a widebody pinball machine, designed by Pat Lawlor and based on the TV series of the same name. It was first released in 1993 by Midway (under the Bally label). This game is part of WMS’ SuperPin line of widebody games alongside Star Trek: The Next Generation and Indiana Jones: The Pinball Adventure.

Following the huge success of The Addams Family pinball game, Midway gave Lawlor full creative control over the design of his next game, and the result is an unusually complex machine. Among its noted features include a working gumball machine (which deposits balls), a working analog clock (used as a timer for various modes), the Powerfield (a small separate play field where the ball is propelled by magnets rather than flippers), and the “Powerball”, a white ceramic ball which is lighter than a regular steel ball and is non-magnetic.

In addition to adapting the theme music from the original TV show, the game’s main background music is an interpretation of the 1982 hit “Twilight Zone”, by Golden Earring. Tim Kitzrow provided the voice of Rod Serling.[1]

This game was originally supposed to be the first game to use Williams / Midway’s DCS Sound System, but because the DCS board was still in development when the game was released, it instead used the Yamaha YM2151 / Harris CVSD sound board.

Twilight Zone is currently the top-rated electronic pinball machine of all time on the Internet Pinball Machine Database.[2] 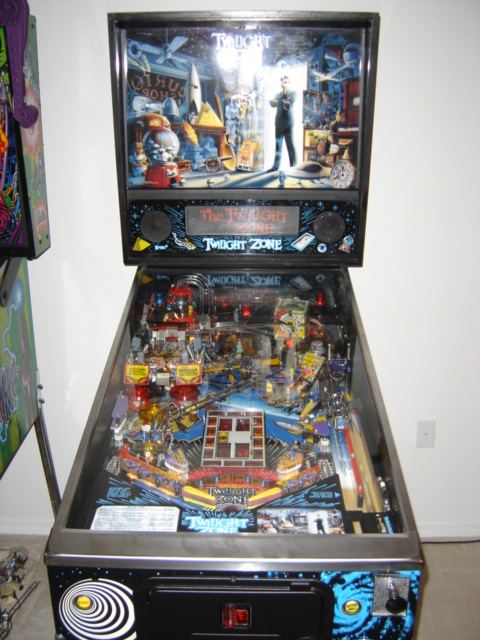 Connections to the TV series

The Twilight Zone pinball machine is filled with references to its namesake TV show. These references include, but are not limited to:

Oddly, two of the most prominent features of the game – the gumball machine and “The Power” – do not appear in the TV series at all.

In the center of the Twilight Zone playfield artwork is a door similar to the one shown in one of the TV show’s opening sequences. The door consists of 14 border panels indicating various awards that are available for the player to collect. Some of the panels start single-ball or multi-ball timed modes that can be “stacked” (started while other modes are in progress), while other panels simply light shots or award points. The ultimate goal of the game is to light all fourteen panels and start “Lost in the Zone”, the game’s “wizard mode”, represented by the doorknob.

The game provides several ways to light door panels: Shoot the Slot Machine when lit, shoot the Player Piano when lit, or defeat the Power in the mini-play field. Shooting the Slot Machine awards a random unlit door panel, while the other two methods award the door panel that is currently flashing (rotated by the pop bumpers).

The door panels are as follows:

The one single-ball mode not accounted for by the door panels is “Battle the Power”. The door panel by the same name merely lights the right ramp. To actually play the “Battle the Power” mode, the player must shoot the right ramp when the shot is lit and the Powerball is not in play. The ball moves to the raised triangular mini-playfield (the “Powerfield”) at the left edge of the main playfield, and the player must then direct the ball into the top hole within a set time limit. The Powerfield utilizes two medium-power magnets that act as flippers (dubbed “Magna-Flips”). Points are awarded for hitting switches on the walls. If the ball falls through the bottom hole or time runs out, the player scores the points accumulated during the mode. If the player succeeds in shooting the ball through the top hole, the total is doubled and the currently highlighted door panel mode is started. (This will start “Lost in the Zone” if all door panels have been started.)

Since the Powerball is unaffected by magnets, the game will automatically disable Battle the Power whenever it senses that this ball is on the field. Shots to the right ramp will be dropped in front of the upper left flipper. If the player lights Battle the Power, that ramp will light once normal single-ball play resumes.

Note: In most commercially released machines, the Standard Multiball mode starts with three balls being released sequentially from either the Lock or the auto plunger, depending on how many balls are physically contained in the Lock at the time. An alternative start to this mode is available in some versions of the ROM software, and requires that a third magnet be installed in the Spiral orbit (standard machines only have two magnets). This allows the machine to lock all three balls in the Spiral Magnets and then release them simultaneously.

Twilight Zone is available as a licensed table of The Pinball Arcade for several platforms. Unlicensed recreations of the game are available for Visual Pinball and Future Pinballthat run on Windows.