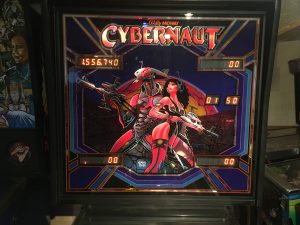 With only 900 produced back in May of 1985, the Bally Cybernaut pinball machine is a highly sought after and instantly collectible classic pinball machine that features some of the finest aspects of pinball history all in one machine.

The space oriented cyborg / alien theme and elements are rendered with a stunning and visually satisfying art package that is rich and deep in color and paired up with some of the best classic pinball digital midi type sounds and effects ever recorded into a game.

Cybernaut runs off of Solid State technology on a Bally MPU AS-2518-35 and features digital displays, 4 player action, 3 flippers, one ramp leading into a tube and 2 controlled gates that are open or closed depending on where you are in the game. 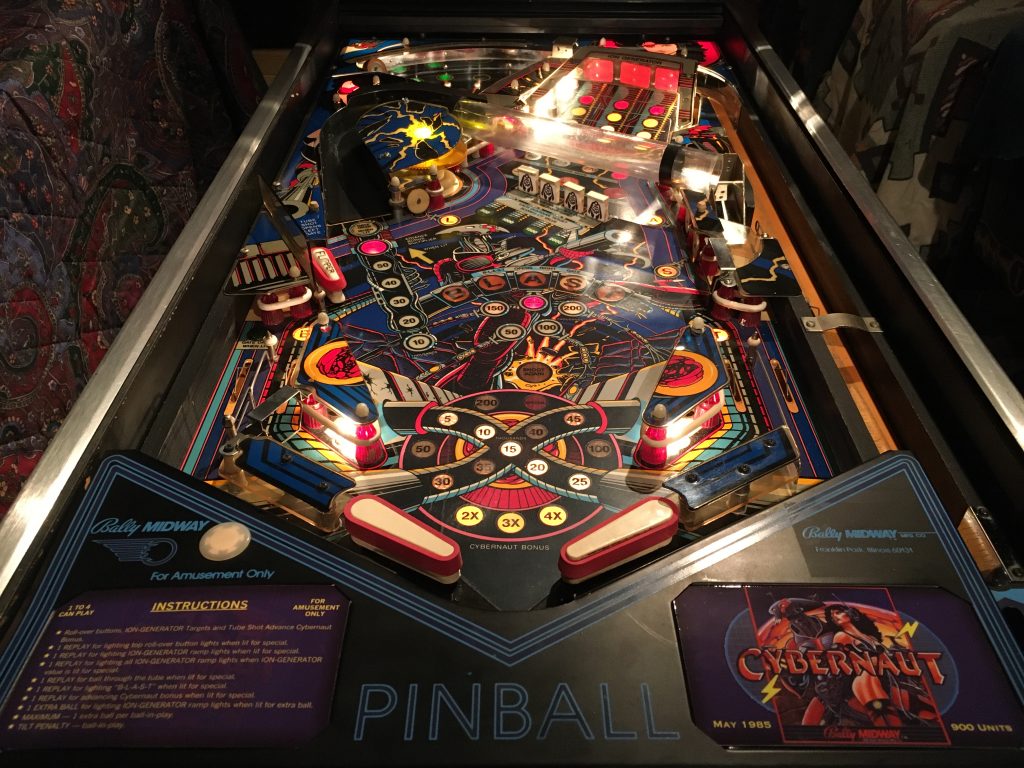 Also noteworthy is an interesting fan layout up top where you can collect all 4 bonus switches.  The key is to launch the ball perfectly so it hits the rubber bumper, then bounces to the right, then left, and maybe right again, crossing over top of all 4 of the rollover buttons.

Sometimes during game play you can activate one of the gates which puts the ball back into the launcher after making the ramp shot that leads into the tube.  When this occurs, you can launch back up and try to light more of the bonus rollover switches, and subsequently collect whatever is lit when the ball drops into the kickout hole.

The backglass slides out so you can service the lamps, but if you want to work on the boards behind it, just open the whole backglass up on the hinges it’s framed in and mounted on.

Cybernaut is the only Bally game to use a very specific and unique logic board.  It’s missing the 5101 RAM chip, and has a smaller one instead. There’s no RAM above it either, the socket is left unused.  Other changes include a few jumpers and a few less chips, but it still uses the regular processor and two 6821 chips.  After the one time use in Cybernaut, the board was replaced with the 6803 board which is found in 8 ball champ.

There is no speech in the game, just sound but the effects are ideal for the theme.  The background heartbeat sound builds up intensity after you complete a row of targets in the Ion Generator.  At one point, it may sound like it would if one were to inhale nitrous oxide.  At least, that’s what some people have told us.

The special is immediately lit upon launching the ball.  If you get all 4 targets up top, you can get an instant free game.  You have to keep the ball bouncing around long enough to hit all of the targets, but if your gate is open after hitting the tube shot, you can get back up there to complete the targets.  Completing those rollover button targets up top also collects bonus.

Check out this 2 million+ point bonus on Cybernaut!

Each time you get the guardian targets down, you get points, but it also opens the gate so you can get your ball back. You also get more access to the Ion Generator once the guardian targets are out of the way.  The first row completed nets 90,000 points, and the sound gets more intense.

One of the crown jewels of the Pinballer Collection, Cybernaut will most likely be assuming indefinite permanent residency. 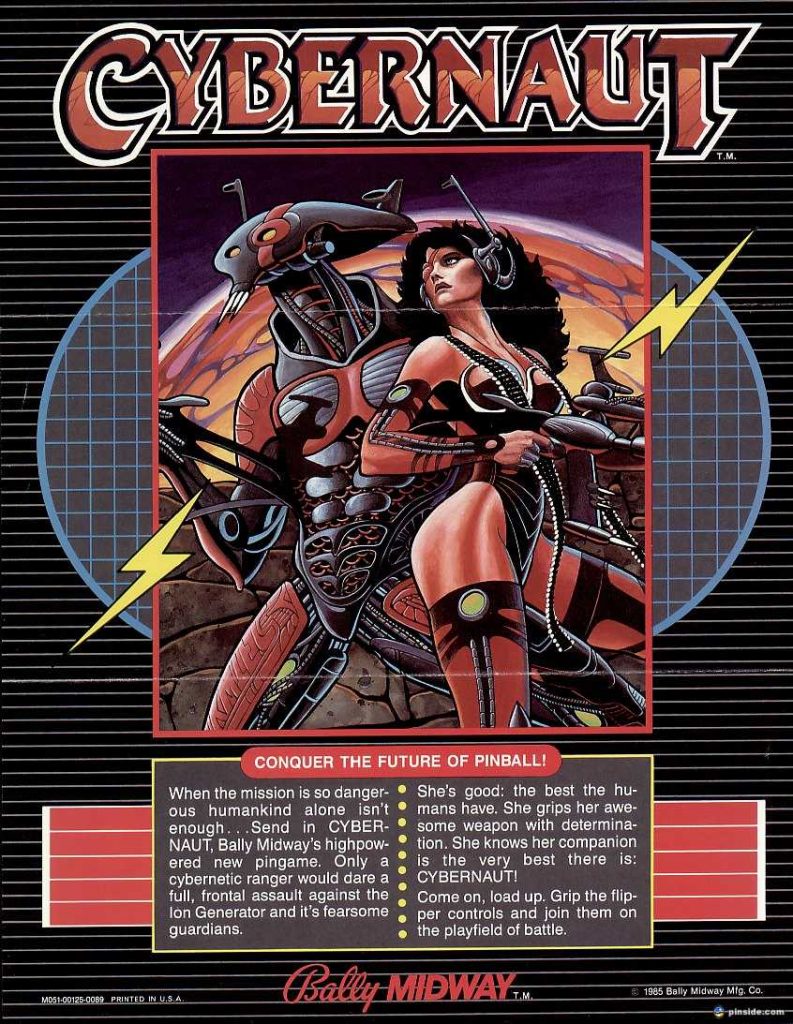 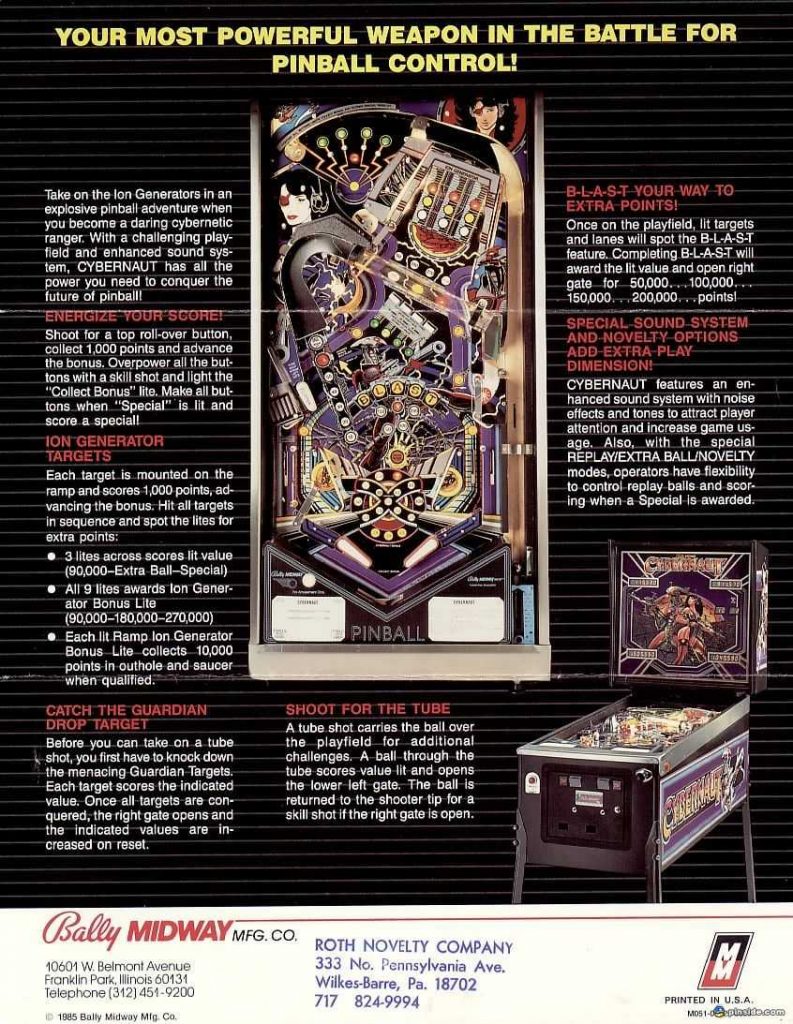